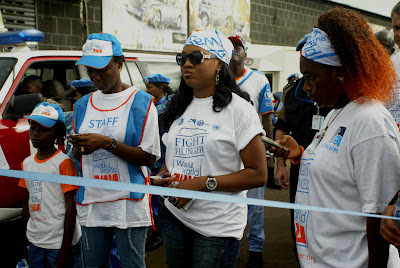 Many years ago, I went to Liberia to represent the United Nations in World Food Programme. As part of my itinerary I had to visit a hospital and they took me to the female ward.
I must tell you that what I saw was so heart wrenching that I broke down. The girls in the ward were between 10 and 14 and they were all mothers. Their kids had HIV, some of them had Vesico Vagina Fistula, VVF, and some had surgery to repair the effects of the abortions that had been done.


I was too shocked to even say anything other than to smile and hug them to make them feel loved. That was all I could do. I ran out to the representative who told me this was nothing new because it’s was all over the place. He told me that other African countries were experiencing even worse cases which I did not believe till I went to South Africa for another programme.
I came back to my own country and then felt like wool had been removed from my eyes because I started to meet little girls who were in so much trouble.


I got invitations to some all-girl schools to mentor them. By the time I spent time with the young girls I realised that we had a huge problem on our hands and people were not even taking it seriously.
We are worrying about oil, business, aviation, power, government etc; meanwhile our future is fast going down the drain.


I sat down and thought to myself, instead of moaning inside my house, why don’t I set up something that I can spread to as many places as God would permit me to.
After I wrote down the idea, I left it and moved on to do other things but my spirit kept troubling me and my conscience would not stop pricking me. And so one day I decided to revisit the idea. Coincidentally, I met with the founder of Project Alert, Mrs Josephine Effah Chukwumah, who decided to make me an ambassador. Through this I was exposed to a lot of things happening to women that no one wanted to talk about. I was so moved and inspired that I decided to help fight the injustice.


I got to know more about issues like domestic violence, rape, child molestation, child trafficking, dehumanisation of widows, incest against infants and many more unbelievable things .
In the course of all this, I also discovered that young girls have issues but they have no one to talk to, most cannot talk to their mothers, sisters or friends for fear of gossip. They can’t even talk to guidance counsellors because they believe counsellors are answerable to the head of school who will in turn tell their parents. Pastors are totally out of it.
At the end of the day, it turned out that they were going through a lot within their environment from their fathers, brothers, neighbours, teachers and house helps but can’t cry out.

Women who were also going through domestic violence did not even know they can be protected by the law, young girls in unhealthy relationships because of the promise of education don’t know they can get help and stand strong.
A lot of young women don’t know that they can learn and train to do any kind of work that they have the passion for without thinking it’s for the opposite sex only.

Most Teenagers don’t have parents who are bold enough to talk to them about sex before they hear it in school. When schools teach sex education, they talk about the parts of the body, what it can do and the fact that it will lead to pregnancy. They don’t tell them the psychological and emotional part of it, they don’t explain to the girls that they can say no and mean no, they don’t make them realise how important their bodies are. As the school depends on their parents to do the dirty job, the parents are too embarrassed to discuss it, so they wait for the school to do it. At the end of the day who is losing?

I finally gathered the courage to set up ADIVA which is a mentorship programme that helps women and young girls to rediscover themselves, unlock their potential, find their inner strength and become the best they can, also using God’s word.


I have never told anyone that I am an authority who has a right to tell people how to live, but I know that even with the amount of years I have spent on earth I have gone through experiences that people twice my age have not experienced.
I have seen different sides of life, from being married to being a mother and then a widow, a star, being judged and castigated, divorced, losing everything and starting all over again, running away from God out of anger and finding him again, from doubting myself to finding myself again and experiencing restoration. By God’s grace I have done Adiva in Cameroon, Liberia, and on Friday, 28 September, it will take place in Abuja at Savannah Suites, 8 Faskari Street, Garki, area 3, Abuja, Nigeria’s capital at 10 a.m.
It is tagged “Real Talk”. Let’s talk about God, men, sex, money and everything between. Admission is free and it is strictly for female folks who are 15 years and above.


Adiva will tour the country and the world.
Let us join hands and raise a generation of strong, beautiful, intelligent, decent, bold, industrious and courageous women.


Quote: You become what you believe, not what you wish you could be or what you want to be.
Posted by Stella Damasus at 16:42:00